We are dedicated to keeping our customers and employees healthy. Click here to learn more about our COVID-19 response.

What Is Fire Damage? 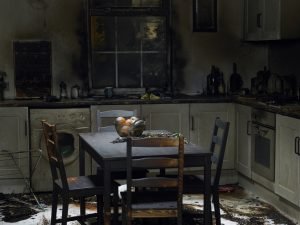 Fires are one of the most devastating things that can happen to a person. According to the National Fire Protection Association, on average a fire department responded to a fire somewhere in the US every 23 seconds. An estimated 358,500 home fires occur every year with 50% of these fires starting in the kitchen. Until it occurs to you, it may not be immediately clear what fire damage actually is and what it entails.

By definition, fire damage is sudden and unexpected physical damage to property caused by a fire. This damage may be either directly caused by the flames or could occur due to smoke or other corrosive substances emitted by the fire. With that being said, there are actually several different classes of fire damage that can occur, often identified by looking at where the fire stemmed from. To prevent fire damage from happening to you, it’s important to understand each type.

This is the most common type of fire that can happen to homeowners in the United States. This type of fire comes from flammable items such as cloth, paper, plastic, rubber, and wood. As an example, keeping your space heater too close to your curtains can ignite a fire and result in a Class A fire.

This kind of fire is very similar to Class A as it stems from flammable objects. While Class A is flammable solid objects, Class B fires start from liquid flammable objects, like paint, oil, wax, etc. This fire classification typically does not include cooking fires, even though they are commonly caused by flammable cooking oils and/or grease.

This class of fire is in the same line as Classes A and B but occurs from flammable gasses like butane, hydrogen, natural gas, and propane. Propane and butane are typically used in cooking, so this class can also be classified as kitchen fires. These gasses are all extremely dangerous and even just a single spark has the potential to create an explosion, so it’s imperative that they are stored in sealed containers in safe storage areas.

This classification of fire begins when combustible metals such as magnesium, sodium, aluminum, and potassium ignite. These fires aren’t very common, as it takes intense heat for these materials to ignite. The most common source of a class D fire is not solid blocks of metal – as they can quickly displace the heat to their surroundings – but finer deposits of metal such as powder or shavings. They occur most often at factories, laboratories, and warehouses where they are used to cut, drill, or mill metals.

Class F fires are ignited by cooking fats, greases, and oils, most often in a kitchen setting. Fires don’t usually start from these materials unless they are at extremely high temperatures, so they are difficult to put out.

Now understanding the different types of fire damage can help you prevent fire damage from occurring to you. However, sometimes things happen that are out of our control. Because of that, Sierra Restoration is always available for you to help you. Professionals can help you with any advice and resources that you need to ensure that you get a job well done. If fire damage does happen to you, they will do all that they can to bring your home back to its original state to the best of their ability by checking the integrity of your home, removing and cleaning soot and debris, and rebuilding.

If you have a question or would like to request a free estimate, please contact us using the form below.
If this is an emergency, please call (435) 563-4007 for 24/7 service.

Since 2010, Sierra Restoration has provided the Cache Valley with reliable, friendly restoration services. We offer competitive pricing, professional craftsmanship, and 24/7 emergency assistance. Our motto is as follows: Restoring dreams one home at a time – with value, quality, and timeliness in mind.